How do I insert special characters in Windows?

One of the easiest ways to enter a special character is to simply copy and paste it. For example, if you see a smiley face character (☺) that you would like to use, you can select the character by double-clicking it, then copy it to the clipboard by pressing Control+C. You can then click inside a document or form and press Control+V to paste the symbol where the flashing cursor is located.

The numeric keypad is located on the right side of desktop keyboards. On laptops, the numeric keyboard may be superimposed on the following rows of keys:
7 8 9 0
U I O P
J K L ;
M

Once you have activated the numeric keypad, simply perform the following three steps to enter a special character using an Alt key shortcut.

Below are some examples of Alt key shortcuts:

NOTE: Adding a 0 (zero) before the the number will produce a different special character than the the same number without the zero.

The Character Map allows you to view a matrix of special characters available in Windows. It allow you to search for specific characters, then copy them to the clipboard.

In Windows 7, you can open the Character Map by clicking the Start Menu and selecting All Programs → Accessories → System Tools → Character Map. Or you can simply start typing "character map" in the Start Menu text box and press Enter, as shown below. 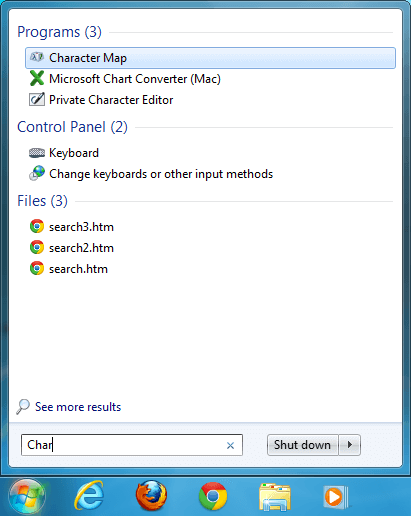 In Windows 8, the Character Map (named charmap.exe) is located at C:\Windows\system32\charmap.exe.

However, the easiest way to open the character map in Windows 8 is to go to the Windows Start Screen (by pressing the Windows button), then start typing "character map," which will make the app name appear on the left side of the screen. Simply click the Character Map option to open the program, as shown below.

The Windows 8 Character Map (which is nearly identical to the one in Windows 7) looks like this:  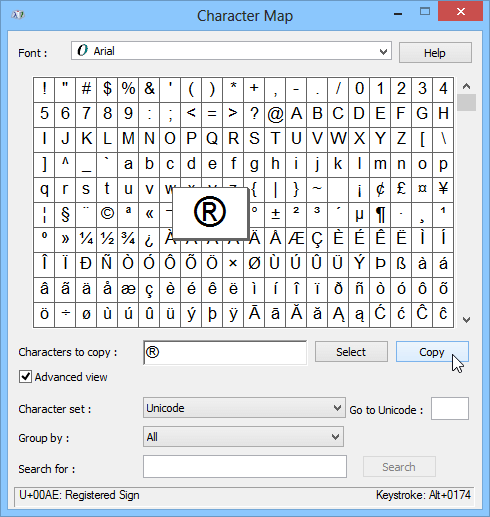 The Character Map window allows you to change the font so you can see how different characters appear in different fonts. You can also search for specific characters (such as a heart or a diamond) using the Search field that appears when you check the "Advanced view" checkbox.

Below are some examples of unicode shortcuts.

NOTE: Not all Windows programs support Unicode shortcuts. For example, they will work in WordPad, but not in Notepad.