HomeBlogGhosting: The Most Efficient Goodbye

Ghosting: The Most Efficient Goodbye 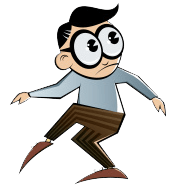 It's the most wonderful time of the year! The holiday season is upon us, and so comes the onslaught of social gatherings. These get-togethers with family and friends begin to fill the calendar, kicking off with Thanksgiving, or maybe Friendsgiving for some, and lasting all the way through the New Year. While these gatherings may be worthwhile, even fun, there is a side to dread of these get-togethers: the goodbye ritual.

You've been there — you're at a party, and because of the time, another commitment, or downright lameness of the party, it's time for you to bounce. The problem is, you feel obligated to notify others of your departure. This procedure is not only awkward but has an awful party-pooping effect, especially if the host thinks you are leaving too early. If that goodbye wasn't painful enough, you run into one person after another on your way out the door. Before you know it, your goodbye turns into a 30 minute parade of, "It's so good to see you... we should hang out sometime [not actually]... say, 'Hi' to your mom for me!"

But fear not, yuletide partygoer. There is a simple solution to this dilemma: ghosting! It's the act of leaving without saying goodbye.

How freeing is that? You simply walk right out the door and poof! You are gone like a ghost that disappeared into the night. It is easier said than done, as you may have to bolt for the door when no one is looking, but nevertheless, ghosting is gaining in popularity among partygoers this season.

Now this concept may seem rude to some. After all, the polite thing to do at a party is thank the host for his or her hard work. But don't feel guilty, the host probably won't even notice. If she does, simply send her a text or, better yet, tweet or post about the party and how much fun you had! No one can be mad at you after a public compliment, right? Besides, leaving without saying goodbye is nothing new. It has been going on for years, under the names the French exit, Irish goodbye, and Dutch leave.

So don't let the prospect of long farewells make you a grinch this holiday season. When you need to rollout, just ghost!