HomeBlogTo BAE or Not to BAE?

To BAE or Not to BAE? 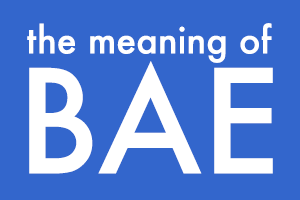 Without a doubt, one of the most popular slang terms from 2014 was "bae." Over the past year, it has appeared in social media, texting conversations, TV shows, viral videos, and songs, like Pharell's "Come Get it Bae." Even TIME magazine featured an article defining "bae."

The term was also one of the more confusing terms of 2014 and continues to be in 2015 since many people disagree about what it actually means. Some argue that it means "baby" or "babe," others argue that it is simply the Danish word for "poop", which it is.

These are all reasonable assumptions and some are actually close to the true meaning for the term but the most popular and accurate meaning of "bae" is "before anyone else."

While the term is an acronym, it is most commonly used as a term of endearment, as a replacement for terms such as "honey" or "cutie pie." It often appears as "Bae" and is utilized to refer to a significant other, such as a GF or BF. Some even use it to describe their BFFLAB.

The origins of the term are unclear as it has been used variously in Hip Hop and R&B communities in the last 10 years. But it wasn't until the end of 2013 and beginning of 2014 that the term rose to prominence with appearances on Twitter, Reddit, and viral videos. Now in 2015, the term is still going strong, with frequent usage around the web. But, as with all popular slang, there has been a large amount of backlash against the term, led by the crusaders sworn to protect the English language, who tend to comment at the end of articles.

Regardless of what side you fall on, "bae" remains relevant today and could eventually find its way into dictionaries, much like the BRB and LOL acronyms. Now that you know what "bae" means, how will you use it?