Every year employers around the United States lose hundreds of millions of dollars during the month of March. But it's not because of any union strikes, natural disasters, computer viruses, or Ebola outbreaks. Nope, it's because of a basketball tournament, the NCAA Men's Division I Basketball Tournament to be exact, which captures the attention of millions of viewers for three weeks every March. And while this sporting event causes a massive dip in office productivity, whether it be from employees filling out brackets or watching the games at work to calling in sick or using vacation days, it provides an exhilarating dose of March Madness. 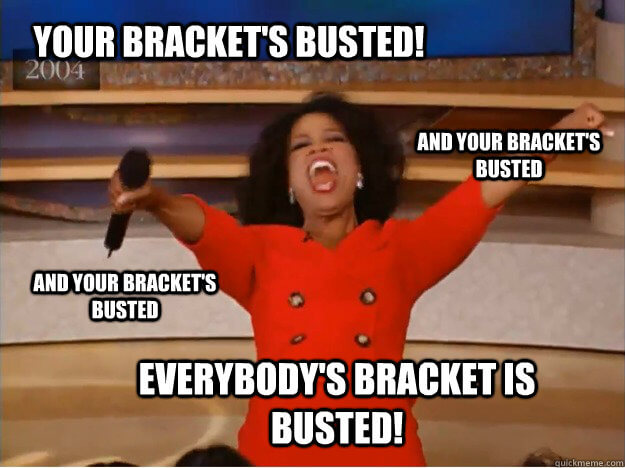 March Madness wasn't always so "mad." In fact, it has a rather meek origin. It was originally founded in 1939 by the National Association of Basketball Coaches and consisted of only 8 teams for the first 12 years of its existence. But through the years, the number of teams steadily increased as its popularity increased, mostly thanks to television. The first games were televised in 1969 but the coverage soon expanded and began to offer a packed schedule with whole days of back-to-back games. Now, with the on demand availability of games streaming via the Internet, viewers can switch between different games at any time and get instant replays.

Although the tournament was created over 70 years ago, it wasn't until 1982 that the March Madness term was first associated with the NCAA Men's Division I Basketball Tournament. It was first uttered by CBS broadcaster Brent Musburger on air, and caught on like wildfire. However, the use of the name led to a legal battle in 1989 between the NCAA and Illinois High School Association (IHSA). The IHSA had been using the name for their March basketball tournament ever since 1939 when Henry V. Porter coined the "March Madness" term in one of his essays. Thankfully the issue was eventually resolved in the mid 1990s, with the IHS gaining rights to the name on the high school level and the NCAA controlling the rights on the collegiate level.

Nowadays, the tournament consists of 68 teams battling against each other on the hardwood to be crowned the best college team in America. The tournament is single-elimination and made up of 4 regions based on the Midwest, South, West, and East locations. Each region hosts 16 teams seeded in order of the team's ranking with the 1 seed (the best team in the region) playing the 16 seed (the worst team), the 2 seed playing the 15 seed, and so on. The winner of each pairing then plays the winner of another pairing. The last four teams of each region make up the Sweet Sixteen, the last two teams of each region make up the Elite Eight, and the winner of each region makes up the Final Four. Then, the two victorious teams from the Final Four play in the championship game to decide the winner of the whole tournament.

March Madness is truly a phenomenon. The sporting event has left an indelible mark on America and continues to today. The tournament has even introduced a variety of slang terms into America's lexicon. Whether you watch the games or surf the web, especially Twitter and Facebook, you will most likely see and hear various March Madness-related terms during the next three weeks, such as bracketology, cinderella, and bracket buster.

Each year, March Madness provides everything from flying dunks to buzzer beaters to stunning bracket busting upsets. This sporting extravaganza proves itself time in and time out that it's some of the best entertainment available, maybe that's why we can't get any work done.