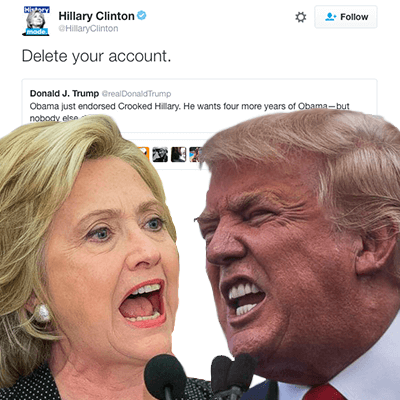 Liar! Flip-flopper! Fraud! Phony! Traitor! It's not uncommon for U.S. Presidential candidates to attack each other during an election. It's actually expected nowadays.

However, when candidates directly throw shade at one another on Twitter, it's a bit more surprising.

That's what happened when Hillary Clinton (actually her social media team) responded to a critical tweet by Donald Trump with the now viral "Delete your account" tweet heard around the world. The Twittersphere predictably went nuts, making it her most retweeted tweet ever (over 400,000 RTs, with both love and hate for the response.

A little context to this Twitter beef: On Thursday June 9th, President Barack Obama had just announced his support for Clinton as the Democratic nominee for President:

Honored to have you with me, @POTUS. I'm fired up and ready to go! -H

And Trump responded with this:

Obama just endorsed Crooked Hillary. He wants four more years of Obama—but nobody else does!

Which led to this response 5 minutes later:

And then this rebuttal by Mr. Trump:

How long did it take your staff of 823 people to think that up--and where are your 33,000 emails that you deleted? https://t.co/gECLNtQizQ

Thankfully, their exchange ended there considering that one of these two candidates is going to be POTUS, aka THE MOST POWERFUL PERSON IN THE WORLD, in a matter of months and this probably looks a little childish to other leaders around the world.

However, that didn't stop tweeple everywhere from joining in on the fun. There were a variety of responses including an Oh Snap tweet:

#DeleteYourAccount In case that was unclear, that's what getting owned in 3 words looks like, @realDonaldTrump pic.twitter.com/nlQkCTKvwb

When Team Hillary makes your day with one Tweet. #DeleteYourAccount pic.twitter.com/OacsuKh5Q6

Ironic that @HillaryClinton tweeting out #DeleteYourAccount thus reminding us why she's under federal investigation pic.twitter.com/Ve8Q48vYSD

Although Clinton's response to Trump's tweetsult was rather ironic considering her own problems with deleting emails, it was a perfect use of "delete your account." For those of you not familiar with the phrase, it is used to insult an Internet user when he says or does something stupid. The term commands him to voluntarily remove himself from the conversation, forum, YouTube comments section, etc. It's a straightforward way to say that the offender is not even worth arguing with and it's on par with the uninstall, go home, and more drastic kill yourself burns.

Unfortunately, now that the term has hit meme status and will be used by everyone and their mom, it won't be as cool as it once used to be. But even so, if you find yourself in an online scrum and don't have any witty retorts you can always rely on "delete your account" for a comeback -- unless you're running for President -- then try to stick to the real issues, like taxes, job creation, and family values.