2016 was a cray year. There was the battle for POTUS, the deaths of beloved cultural icons, Great Britain saying bye Felicia to the European Union, and an onslaught of crying jordans. Some thought 2016 was a dumpster fire, while others thought we made America great again (MAGA). Regardless of your feels about 2016, it was a great year for slang. So before we close the book on this year let's take a look at the most popular slang terms from 2016.

PEOTUS is one of many political terms that were popular in 2016. It is an acronym that means President-elect of the United States and was commonly used in news articles and on social media after the election to refer to Donald Trump. Despite its popularity in 2016, you won't see the acronym for long. After Trump's inauguration in January, the PEOTUS becomes POTUS.

Brexit is one of the more serious slang terms on this list. The term combines "British" and "exit" and is used to describe Great Britain's decision this summer to leave the European Union over economic and immigration concerns. The term is a variation of the Grexit term, which refers to Greece's exit from the eurozone in 2015. Brexit wasn't just popular in Europe and the U.S. either. People around the world learned the term due to its effect on global markets. 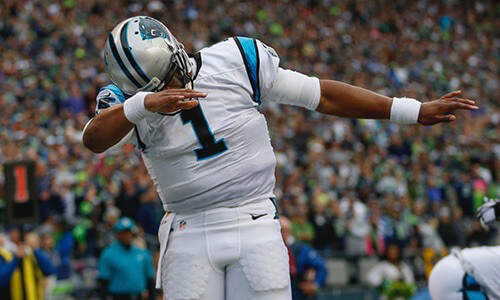 Dab, or dabbin, is a hip hop dance move that originated from the Atlanta hip hop scene. It became popular near the end of 2015 and peaked in the beginning of 2016 when Cam Newton, an NFL QB, adopted it as his TD celebration. The dance move consists of a person leaning his head into his elbow with his other arm stretched out diagonally, which appears similar to covering your nose with your elbow when you sneeze. The move became especially popular with kids and teenagers.

Fake news is not a typical slang term but it became popular as a political term to refer to news stories that appear real but are actually fake. While fake news stories, like the satirical ones from The Onion, have been around for years they have never been more prevalent than during the 2016 race for POTUS. During the election fake news stories were released to deceive people into believing conspiracy theories and other false claims. Many attribute the rise of fake news to Facebook and Twitter users' willingness to share news stories without checking their validity.

Harambe is a gorilla from the Cincinnati Zoo that was shot and killed by zoo officials after he had grabbed and dragged a three-year-old boy who fell into his enclosure. It sounds kinda morbid, right? Well, people were outraged that the Gorilla was killed so they went to the Internet to voice their frustrations. Many people made serious and comical memes about the situation. Before long, the term grew in popularity as a way to not let people forget about Harambe, elevating him as a saint or martyr. However, while some of the usage is done with sincerity, most of the time people use it to be funny and as a trolling tactic.

Lit is a term that many teenagers used in 2016 as a substitute for cool or awesome. It is commonly used to describe a party or event that is going to be or was exciting and fun. The term may also have connections to alcohol and drug consumption much like turnt, turnt up, and turn up.

Shade is a term that means disrespect and commonly appears as "throwing shade", which is similar to saying disrespecting, dissing, or talking trash. It often occurs in a public forum to get the most reaction and appreciation out of a sweet dis. The term first burst onto the scene in 2013 but its use has steadily risen since then, making it one of the most popular slang terms of 2016.

Squad is a term that refers to a close group of friends, similar to a clique. It is commonly used to describe a picture of friends on Snapchat, Facebook, or Instagram. A squad may do a variety of activities together like clubbing, crashing weddings, shopping together, or just chillaxing. These trustworthy friends won't bail on each other, regardless of the circumstances.

Woke is a term that refers to one's awareness of current social injustices, specifically relating to racial injustices. The term comes from the idea of a person being "woken up" to modern discriminations. Woke is often used as a challenge to white people who benefit from certain privileges because of their skin color. The challenge is to not give in to pressures from other people and stand firm with those being oppressed. Woke is also commonly seen as stay woke and get woke and is used by movements like Black Lives Matter.