A baller's guide to basketball slang

As basketball has evolved over the years, so has its language. Here are 20 slang terms to know that will get you ballin in no time.

Jumper is short for jump shot, which is when a player jumps in the air to shoot the ball. It is one of the most common basketball terms and may be a shot for two points or three points (if it is beyond the 3-point line).

An air ball is a missed shot that doesn't touch the rim or the backboard. It's also a popular taunt in basketball. Opposing fans might chant "Air ball!" before a player shoots a free throw or after a player takes a shot and misses the hoop entirely.

Like air ball, brick is another term for an ugly missed shot. However, instead of only hitting air, a brick squarely clangs off the rim (or backboard), typically because it is a shot on a flat trajectory and has no chance of going in the basket.

Swish is a classic basketball term that refers to a near-perfect shot where the ball only touches the net, not any of the rim. The name comes from the net's sound when the ball quickly passes through.

Splash is similar to swish, but most people associate it with made 3-pointers. It gained prominence among basketball fans when the Warriors nicknamed the sharp-shooting duo Steph Curry and Klay Thompson the "Splash Brothers" in 2012.

Downtown is the area beyond the 3-point line, far from the hoop. Announcers and fans often say, "From way downtown!" when a player chucks up a deep 3-point shot.

Trey is a common term for a 3-point shot. It may be an attempted or made shot from beyond the 3-point line.

A bucket is a made 2-point or 3-point shot. Some believe that the term dates back to the early years of the sport in the 1890s when basketball creator James Naismith and other players used peach baskets, or buckets, for the rim and net. It spawned the get buckets phrase.

In basketball, being on fire is good (unlike most other times) because it means you are shooting well and scoring a lot of points. People may also remark that you are "heating up" or that you have the "hot hand." Or, they might just yell, "heat check!" 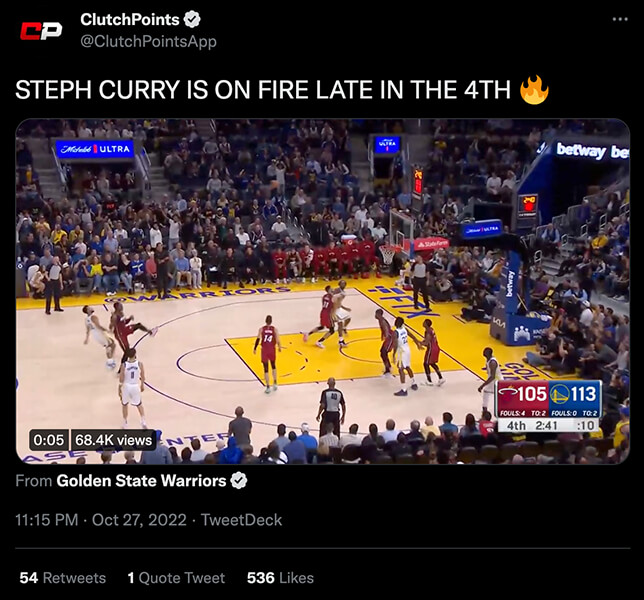 The opposite of on fire is ice cold, which is when you shoot terribly. People may also remark that you've "gone cold."

Dropping dimes is when a player makes passes to teammates who then score points (recorded as assists). Many believe the term comes from the olden days when a kind person gave you a dime to make a call on a public phone when you had no money. In this context, the Good Samaritan helps you (or assists you) by dropping you a dime.

A double-double is a statistical term for a basketball player achieving double digits in two categories in a single game. Possible categories include points, assists, rebounds, steals, and blocked shots. So, if a player records 14 points and 11 rebounds in a game, they achieve a double-double.

Triple-double is similar to a double-double but is when a basketball player achieves double digits in three categories instead of two in a single game. So, if a player records 14 points, 11 rebounds, and 10 assists in a game, they achieve a triple-double.

When a player dribbling the ball makes quick movements, causing the defender to stumble over himself, he puts him on skates. The phrase comes from the clumsiness beginners often feel when ice skating or roller skating for the first time.

An alley pop is an exciting play in basketball where a player passes the ball to a teammate, who then puts it in the basket in mid-air. The player receiving the pass may lay it in, but they usually dunk it.

Players are putting on a clinic when they do something really well, like shooting or defending. For example, an announcer may say, "Steph Curry is putting on a shooting clinic tonight," after Curry makes five 3-pointers in a row.

If a player dunks on another player dramatically and awesomely, they posterize them. The term comes from the photos of players dunking on opponents used in posters that fans hang on their walls. 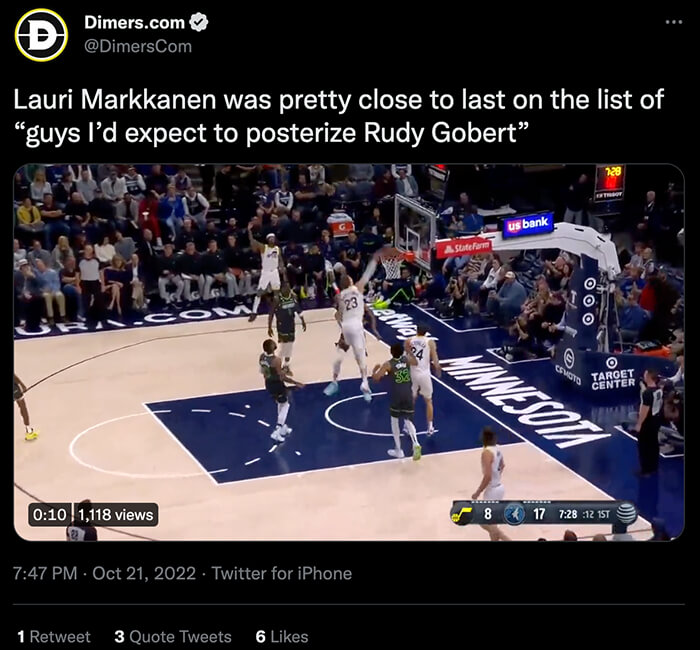 A flop is when a player exaggerates the contact an opponent makes on them and fakes a fall to get a foul call from the refs. Fans, players, and announcers often criticize players who flop, arguing that it ruins the flow and integrity of the game. In 2014, LeBroning became a social media trend where people mimicked LeBron James' propensity to flop.

Want to add some slang to this list? Let us know!